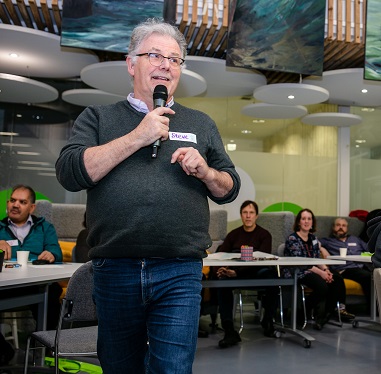 I have described a little of my work in Learning Disability Hospitals before. An important starting point for my facilitation was listening to the stories of staff who had worked in the hospitals, often for decades. It was often a chastening and humbling experience but, almost 20 years later, I remember one occasion vividly.

I was genuinely taken aback by one of the older members of staff referring to the “bad weans” and correspondingly the “good weans”.  Now although I hail from Edinburgh in the east of Scotland where the word isn’t used, I was aware that “wean” (pronounced ‘weigh-in’) was west of Scotland vernacular for ‘kids’. I understood that much clearly but was puzzled – I was sitting in an institution known as an ‘adult learning disability hospital’ which to the best of my knowledge had not admitted a child since the Second World War. So I asked the question – ‘Could you tell me more about that please?’

It was quickly clarified for me that the “weans” were not children at all – simply the patients in the hospital. That was quite concerning in itself – but what about the “good” and “bad” phrases? So I asked about that, and the answer went something like this:

“The ‘good weans’ lived in the big Victorian house (no longer standing) because they were pretty mobile and could use stairs. In fact most of them went out of the hospital every day, used public transport and went to work. The ‘bad weans’ however, lived in the more modern one-story, ground-level block and mostly had significant mobility problems. A lot of them spent most of their time in their bed or in chairs...”

Now to be fair to this member of staff, by the early 2000s there was no question of people being referred to as ‘weans’, but this practice had clearly persisted well into the 1980s and possibly beyond.

In his seminal writings on ‘normalisation’ and ‘social role valorisation’* American sociologist and campaigner Wolf Wolfensburger described how marginalised people could acquire ‘devalued roles a kind of narrative or story that implied that some people were less than full citizens or even seen by the wider world as fully human.’ He articulated several of these devalued roles including being seen as ‘social menaces’, ‘economic burdens’ and so on. However, this story from the west of Scotland was a crystal clear example of a devalued role often applied to people with learning difficulties - that of “eternal children”. I thought it would be hard to find a clearer articulation of that mis-perception of people. What does this say about how you then work with someone?

This hospital had been almost entirely rebuilt in the late 1970s and early 1980s – a fact a little shocking given the trajectory of social policy at the time was clearly to move towards community based services rather than institutional ones – but that wouldn’t be the first or last poor use of public spending! The training I was delivering was in the main administration block of the hospital built at that time. The room next door to the one I was training in had a plaque on it stating proudly “Toy Library”. For the “weans” presumably? No one could explain to me why it was there. As if to further emphasise the point, one of the nurses told a story of how the staff had tried to develop more activities for the residents. She spoke warmly of a former charge nurse who had set up a Boy’s Brigade group in the hospital. ‘The lads had really enjoyed it apparently.’ And, in the absence of a community beyond the hospital with which to interact, I am sure that people did enjoy it. But the BBs were for teenagers, not men in their 30s and 40s. They were a little old for the pill box hats and blanco-ed belts.

And it wasn’t just this institution. These experiences took me back to a visit I made to the Learning Disability Hospital just outside Edinburgh where I was going to meet a man who might be using our community short breaks service in the early 1990s. I visited him at the ‘Special Care Nursery’. I didn’t really know what that meant though understood that he needed fairly significant levels of support and had significant impairments.

Imagine my surprise when I walked into a ward bedecked with beautifully painted Disney characters on the wall – Mickey Mouse, Donald Duck, they were all there – and a room in which a number (I can’t honestly remember how many – ten a dozen) adults with learning difficulties sat around the room in a variety of chairs and big soft cushions.

Wolfensberger spoke to an important truth – unless we discard these distorted lenses which see our fellow human beings as somehow less or radically ‘other’ than us – we will never be able to welcome them into our communities and our hearts as the equal citizens they truly deserve to be.