On the 23rd of April 2015 I went for a one on one consultation at The Thistle Foundation. This was 8 years after my first stroke, 4 years after my second and one year after I was discharged from the seemily endless physiotherapy I'd been doing as a result. It was also after about a year of not really doing anything after college ended.

When I got there I sat down at reception and waited nervously. I didn’t really know why I was there. Not in a dismissive way, I honestly just didn’t know what I should do, what my priorities should be. I suppose that’s why I was there.

When Cathrin, Thistle's Health and Wellbeing Manager, came down to fetch me, we walked through a cafe-looking “hub” area then a gym, with people who were working to improve their situation. It was already a good start and we hadn’t really even talked yet. 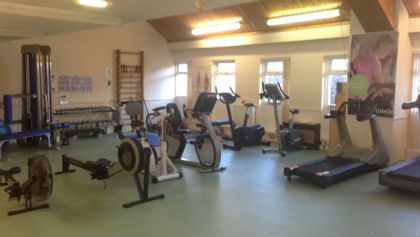 So we got to the room and sat down. I was asked “what matters to you?” rather than “what’s the matter with you?”. I had no idea how to answer. What was the matter with me had pretty much been the deciding factor in most things I’d done since I was 14. I knew I didn’t want to still be on the crutch but beyond that I had no real aspirations or goals and just realising that for myself, in that room was probably as important as any answer I could give.

I was told about a few of the courses that Thistle offers but despite knowing that I wanted to come back, I couldn’t decide on what to do.

I did go back. In fact, as of now, I’ve been going back at least once a week for 3 years. First for support and then as a volunteer. I did a 10 week lifestyle management course and by week 5 or 6 I felt comfortable enough to try and go to Thistle without the crutch. It went ok so I tried it again and it went from there. When the course ended we discussed what I should do next, eventually settling on an exercise based course since I was trying not to use the crutch.

That lasted another 10 weeks and featured support from 3 of the physiotherapists I’d worked with over the years. It was really weird, I felt like so much had changed since I saw them last. I got to be like, “Look, no crutches”.

Now, for the first time in ten years there’s a waiting list for that initial meeting that started so much positive change in my life. So when William, Thistle's Fundraising Manager, asked if my story could be used to help try and fix the problem, I didn’t have to think about it for long.

It was all explained very clearly to me and I knew exactly what it meant but I have to admit that seeing it in the real world for the first time was extremely strange!

As of now I’m on a few digital billboards dotted around Edinburgh (which went up a bit earlier than we were expecting so it felt EVEN MORE weird) and also the side of some busses with more to come such as static billboards and bus rears in the coming weeks.

It still all feels a bit weird but I’m glad to be able to help Thistle help more people in the way they helped me... and I’d be lying if I said it wasn’t also a wee bit cool to be walking down the street and see my own face grinning at me! 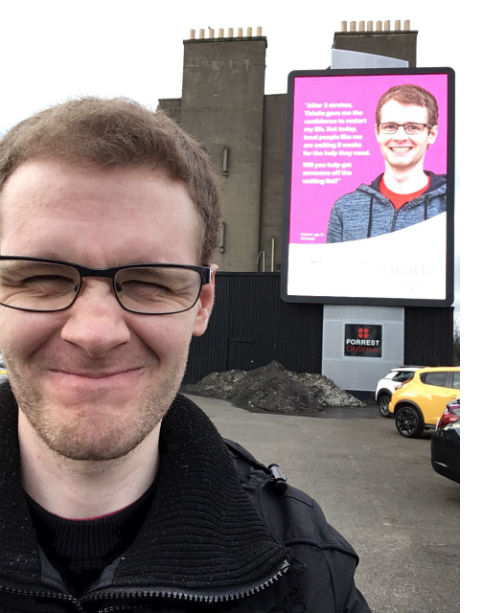 Look out for me and the Thistle logo on ads and let us know if you see them! Make sure to take a photo or selfie and share it with us on Facebook @thistlefoundation or twitter @thistlecharity and donate at www.thistle.org.uk to help #stopthewait.